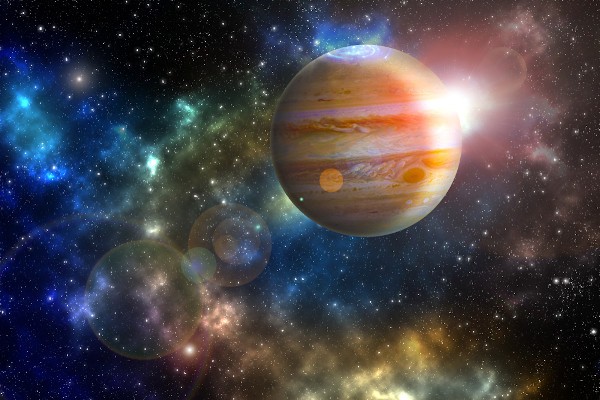 Jupiter, The King of the Gods, has just returned to his own sign of Pisces! Jupiter is the biggest body in our solar system besides the Sun. In fact, Jupiter gathered about 10% of the mass needed to become our 2nd star. I know 10% doesn’t sound like much, but it wasn’t too far from reaching a critical mass to have a runaway effect to become a Sun. We came close to having a binary solar system, and if that happened, we would need a much higher SPF sun block! So, Jupiter almost became a star, is a crucial point. Jupiter has an expansive quality to it, and a “bigness”. Scientists now think Jupiter has 79 moons orbiting it, some of which are planet sized.

When we contemplate the energy that Jupiter represents, we think of the good King. Not really the evil king, but the King who is generous and optimistic. If you were to walk into the dining hall of the good King, there would be an uplifting energy of eat, drink, and be merry – as the King generously shares his bounty to all. Jupiter prefers people be joyous and uplifted. He has a larger than life faith in himself, but also in others. Santa Claus is a good Jupiter image.

What does this mean for 2022? Well, that’s a complex question, but overall this is good news. Of course, 2022 isn’t short on challenges, which I’ll dig into, but Jupiter does offer positive potentials. It’s called the planet of luck and expansion for a reason. Also, with it being in Pisces the Mystic, this major manifester energy, so we want to be careful of where we focus our attention and our desires, because they are more likely manifest. Be careful for what you wish for, because you might just get it! This transit through Pisces is particularly powerful this year because we also have the other planet that rules Pisces, Neptune, also in its own sign. Jupiter and Neptune form an exact conjunction in April, and that’s when the archetypal field crescendos.

We could call this year a mini spiritual renaissance, potentially. At least for those of us that focus our desires towards the Divine, and to become a living embodiment of unconditional love. Actually, that’s the absolute best way to leverage Jupiter this year – to focus on connection with the Absolute Infinite Beingness. Jupiter, the planet of faith in the sign of the Mystic. Working with Jupiter proactively in your life is asking the question, “how am I underestimating my connection to God?”, or, “I’m ready for a higher level of consciousness, how can I claim that victory?”

How you build more faith in your growth is by going “all-in”, to use a poker term. Put all your chips in the middle. This isn’t necessarily a reference to investing into your spiritual life with money, although it can include that. Time is the most precious commodity, and a big bet of time investment on your spiritual development is and perfect call-to-action. If you do that, with the spirit of faith in yourself and the Divine plan, and deepen your spiritual practice, Jupiter promises expansion and gifts. And THAT’S when Jupiter really turns into the planet of good luck, and things work out better than expected. Jupiter is playfully inviting you to proactively co-create gifts, and he’s saying “dream big, My Dear.”

When it comes to the core evolutionary intention, this is bedrock. What about the downside or the challenges? Well, I said dream big, dream is a key word here for other reasons too. With Jupiter joining Neptune in this sign, there will continue to be plenty of dishonesty, delusion, and mass hallucination. Equally so, this year we will see a lot more people “wake up”, as they raise their consciousness out of fight or flight fear state, and they will snap out of the hallucination – the illusion of it all. That doesn’t mean it will always be a blissful harmonious process though, as many people will have strong emotional reactions because they waken from not just a dream, but a nightmare. As they realize the horrific truth within the dream, rage will come to the surface.

This is a perfect segue for the nodes of the Moon changing into Scorpio and Taurus. With south node in Scorpio, there will be an increase of two outcomes: Tremendous breakthroughs in healing, and also childlike temper tantrums. Storminess, in other words. As some people snap out of the dream state, the triggers rise to the surface. Some of those triggers will be justified, some won’t be. Regardless, the opportunity is the same: at this more realized state of being, here is the chance to let go of the burden of traumatic history, and transform even more into Love. Not all with succeed at this though because it takes incredible levels of Soul Wisdom to accomplish this lesson. Alternatively, they see the horror, can’t handle it, and plug right back into the metaverse to escape Reality, and go right back into the matrix because it’s more comfortable than Reality. Dark side of Pisces in general is addiction and numbing oneself.

Also, we have the Saturn/Uranus square ongoing this year as well. Not quite as pronounced as 2021, but definitely still a major event. This is the tension between freedom, decentralization, independence, agency, innovation (Uranus), and control, restrictions, fixation on the habitual and outdated past, centralization (Saturn). On a more personal level, its best to focus on the Great Work (Saturn) of developing more independence, and a comfort in the unique expression of who you really are, instead of who you’ve been trained to be by others (Uranus).

There will be great challenges this year, no doubt about it. All in all though, I am optimistic because bottom line, I believe by the end of this year, the average level of human collective consciousness will be higher than at the beginning of the year. In my opinion, that’s what matters the most.