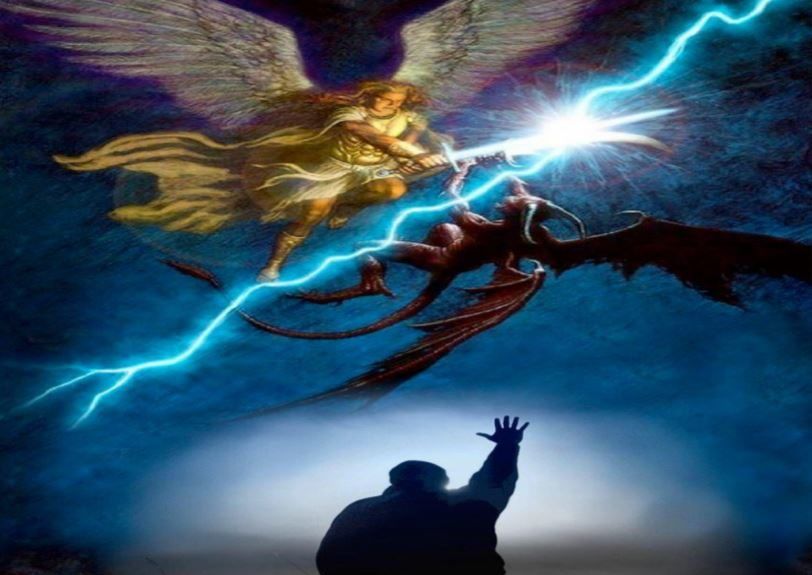 What is really highlighted this month is the battle between good and evil. Or more accurately, between high and low consciousness. Everyone is manifesting a particular calibration on the scale of consciousness in every moment. All thoughts, intentions, emotions, desires, and actions calibrate at a specific frequency between light and dark. Right now, that juxtaposition is really accentuated and tension are high. The reason for this astrologically are two main groupings of planets in the sky.

At the beginning of March, we have the new moon in Pisces, highlighting the Jupiter/Neptune conjunction which continues throughout March and April. This is one of the most powerful events of the year. This conjunction is typically described as good. Keywords that leap to mind are faith, optimism, spirituality, enlightenment, and manifestation. It’s true that this event has amazing potentials, but in fairness, every front has a back. The shadow side of this event is mass hallucination, ungrounded faith, and addiction.

Also at the beginning of the month, we have the Mars/Venus/Pluto conjunction in Capricorn, which is hot, passionate, and triggering. These energies certainly have an extreme low end of manifestation that is triggered when someone or some group of people are acting solely from their egoism. The highlighted words for low consciousness potentials are anger, control, conflict, war, rage, destruction.

Then, later in the month, Mars and Venus ingress into a new sign of Aquarius, and meet up with Saturn. The lesser malefic Mars, and the greater Malefic Saturn meet in the sky. Saturn has been super strong the last few years because it’s been in Capricorn and Aquarius – both the signs it rules. Each time Mars has triggered Saturn by aspect, we’ve seen it coincide with big stumbling blocks and mistakes within the collective. March is another big triggering month.

The events involving Mars/Saturn/Pluto are typically described in a negative light – which I highlighted, but much like the Jupiter/Neptune energy, every front has a back. The flip side positive potentials for this are incredible acts of bravery and willpower, heroism, defending the weak and defenseless, and rising to great challenges. The main point I’m developing here, is that everything in astrology has evolutionary goals. Also, every category of event, no matter how amazing it might be described, we can totally mess up and miss the opportunity.

Regarding our own development, it’s important to focus on the most evolved expression of the Jupiter/Neptune conjunction. This is the placement of high spirituality, and as I said before this is major manifestor energy. One of the healthiest “prescriptions” for these next months is meditation, prayer, contemplation, reflection, and deepening faith in our self and in the divine plan. When we see evil in the world, we can tap into compassionate perspective – that evil is just ignorance, and the origin of the evil expression is pain and suffering sustained in childhood and karmically. With the South node transiting through Scorpio this year, all the wounds of neglect from rejection, betrayal, and abandonment, as a collective is rising to the surface.

How do we respond to that suffering? That choice is ours. Ultimately, those wounds are telling us messages about the origins of our pain, and hopefully instead of the pain being expressed destructively, we transform those trauma signatures in healing energy. The destructive potentials are more connected to the Malefic energies of Mars/Saturn/Pluto. The deep transmutation through faith and optimism is connected to the Benefic energies of Jupiter/Neptune in Pisces. This is why prayer and meditation for peace is such virtuous work right now. The more energy we put into these believing in better outcomes, the more likely they are to occur. Also, if we are able to raise our consciousness through meditation and spiritual practice, the more powerful we are in generating loving intention.

Shameless plug: I just launched my new podcast, which is where I am uploading all my guided meditations now. There’s one there designed for World Peace intention. Here’s the link: https://podcasts.apple.com/us/podcast/expanding-consciousness-with-bryan-colter/id1611404865

Saturn and Aquarius is more likely to generate a lot of doubt and fear about the worst potential future outcomes, whereas Jupiter/Neptune in Pisces is more focused on envisioning a better timeline for us to shift into. Per usual, there’s an evolved expression and a less evolved.

As we try to integrate these very different energies in the best way, it’s about facing our deepest wounds with courage (Pluto/Mars). Also, the Great Work (Saturn) of facing reality bravely and with indomitable willpower (Saturn/Mars). As we stare the demons (suffering energies) in the face, it’s not without compassion, a strong spiritual resolve, and unflinching faith in a better future (Jupiter/Neptune).